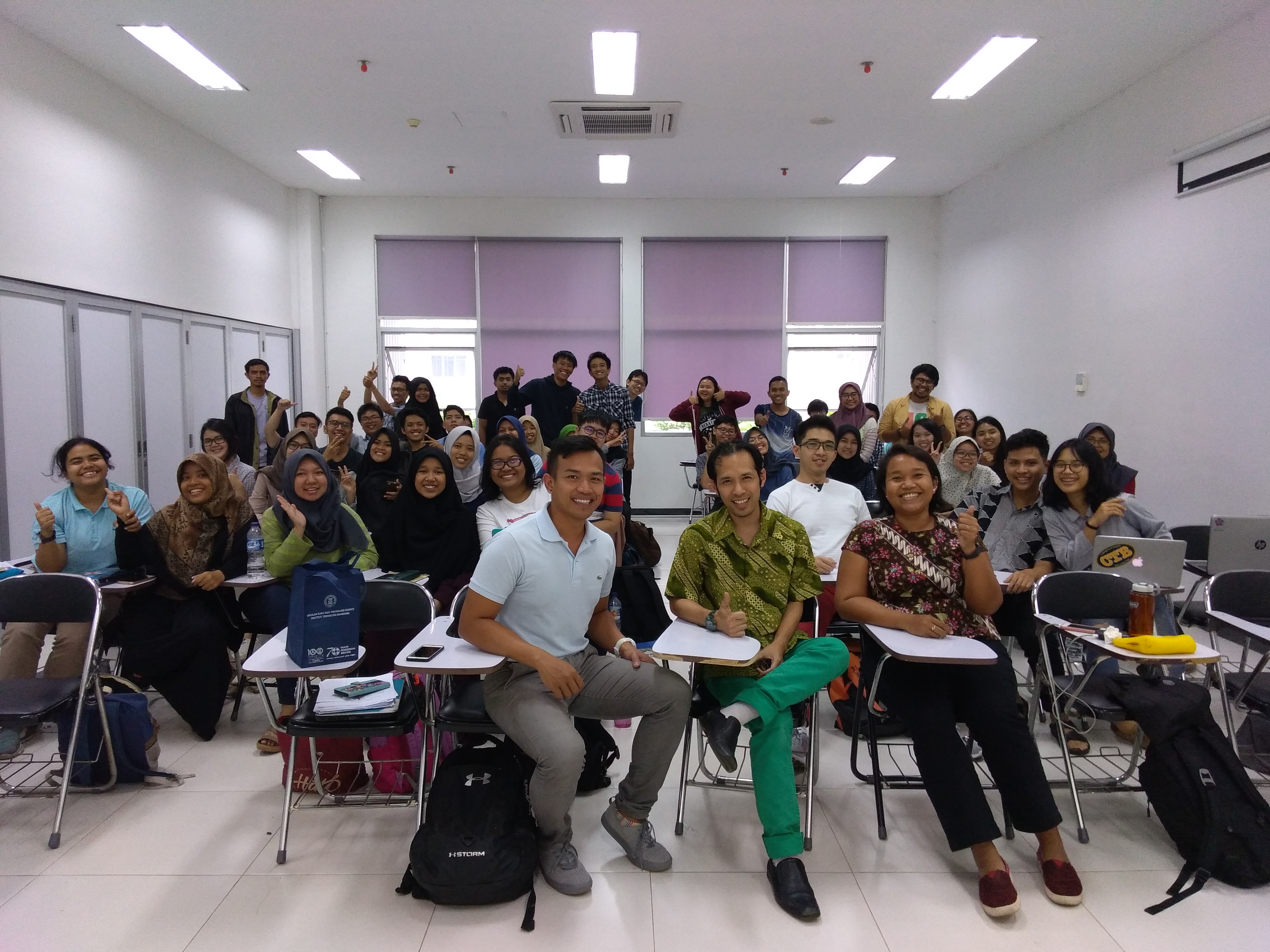 On Monday, 12th of November, SITH-ITB invited Agung Purnama, PhD as a speaker for a Guest Lecture for the Kapita Selekta class about biomaterials and its role in the health care industry. Agung Purnama is an alumnus of SITH ITB. He had his PhD in Materials Engineering from Université Laval, Canada and now is a lecturer at the George Washington University (USA). Now, Agung Purnama is actively working in research concerning regulatory affairs, biocompatibility, tissue engineering, as well as laser technology. On the guest lecture that was held on Monday, Dr. Purnama showed an overview about biomaterials and its history as well as roles in a world of health point of view, and explained some examples of biomaterials in the medical industry, more specifically in the cardiovascular aspect, stents. These explanations were broken down into four main parts, which are biomaterials, biocompatibility, cardiovascular disease and biomaterials, and biological research in biomaterials.

Biomaterials is defined as any substance, or any combinations of substances, other than drugs, which can be used for a period of time that can augment or replace tissue, organ, or function of the body to maintain or improve the quality of the individual. Some examples of biomaterials that are often used today are contact lenses, or ear replacement. Biomaterials is a very wide field that consists of various experts from molecular biology, even arts or electronics, and it is also a field with a multi-billion market in the US alone. Types of biomaterials include polymers, ceramics, composites, metals, and many others, with each type having its own advantages and disadvantages, therefore it is chosen to match specific applications. Biomaterials also experienced evolution that is divided into three generations. 1st generation’s focus was “Bio-inert”, or a biomaterials that were harmless and non toxic to use; 2nd generation’s focus was bioactivity, or where the biomaterials are able to heal; lastly, the 3rd generation focuses on the regeneration of functional tissue caused by biomaterials.

When choosing a material or creating a biomaterial to be put into an organism, its compatibility with the body or tissue around it has to be tested. The ability of a material to perform within an appropriate host response in a specific application is defined as biocompatibility. Testing for biocompatibility usually comes after material development, in the general scheme for biomaterial production, followed by clinical study and the formation of the biomaterials. The results of the tests are compared to standards, whether national or international.  An international standard that is used for producing biomaterials is the International Organization for Standardization (ISO). Aside from reaching the standards, other concerns in the marketing of biomaterials is its safety, efficiency, and also whether its production or use is ethical. There are usually four common methods that are used for testing, which include In vitro, In vivo, Ex vivo, and Hemocompatibility. In addition to those methods, biomaterial experts are now conducting in silico method, a method involving the performance modelling of the biomaterial.

Agung Purnama, PhD explained an example of the application of biomaterials in the real world, particularty its role in aiding cardiovascular diseases; one example being atherosclerosis. Atherosclerosis is a heart disease caused by the settling of fat in artery walls that can clog up the blood flow and eventually lead to death if not treated. One way to treat this disease is a stent deployement. A stent is a biomaterial that can expand the artery walls, therefore maintaining the blood flow and preventing it from being clogged. Stents were created in the late 1980s and have continuously been developed. Currently, the research around stents are centered on creating a biodegradable stent. In developing this stent, many approaches are experimented to ensure human safety and its biocompatibility. The composition of different metal alloys were tested, as well as the creation of different surfaces of the metals. It is found that different metal alloys can cause different parts of the tissues to be toxic or ploriferate, and the surface patterns of biomaterials can also effect the response of tissue in the artery.

Throughout the lecture, Mr. Agung Purnama encouraged us to be involved in the lecture by not being afraid to ask. It could be seen that the students in the room were interested and were actively participating, especially towards the end of the lecture, asking some questions concerning the roles of bioengineers in the development of biomaterials. From the lecture, it can be seen that there are ubiquitous applications of  biomaterials, and such vital ones in the health industry. Aside from that, there are still many other undiscovered potentials of biomaterials to improve and aid the health industry and even other industries. This field needs the hands of various expertise, and one of them could be bioengineers.